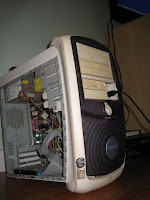 I have always wanted to have a working Windows 98 - XP computer for probably about a year at this point and I decided to talk to my dad about it. He kind of wanted one too to run his old MS DOS games. We talked for a bit about buying an old Optiplex off of Ebay, but at the time I was a bit hesitant since the computer could be junk or we could end up never using due to some issue with the components, Ebay after all is just a wheel of fortune except "lose money" spots say "you're going to get scammed".

The thing is, my dad talked about there being an old Compaq Presario 5000 lying in the barn somewhere. So at the time, I decided to hold off on buying a big computer since there is a chance that I could find that old piece of junk and get it running again. The next day, I decided to head to the barn, flashlight in hand, and take a look inside and see if the computer is lying there. I head up to the right platform and do some looking, and it didn't take me a while until I spotted the old thing. 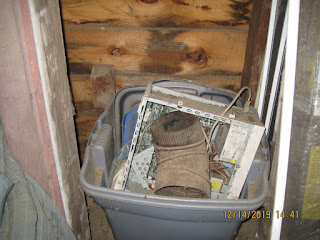 It was just lying there out in the open with its components exposed and an metal tube thing over it. It seemed to be lodged in the corner, so I turned the box 90 degrees and pulled it out from there. I carefully took the metal thing off of the parts and lifted it from the box. I had to set it down since if I were to bring it down from the platform, I'd have to somehow carry it down the ladder leading up to the platform. I climbed a little bit down it, picked it up from where I was standing and headed back down. 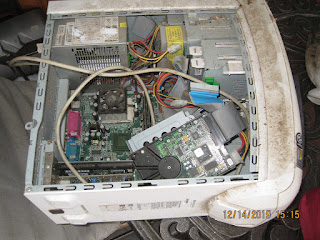 I walk back to the house and place it on the table at the front porch. Now that there was light, I could see the inside of it. It was extremely dirty with spider webs, dead bugs, and dirt all over the case. The hard drive was not mounted at all, the CPU fan was very dusty, and the power supply cable was just kind of lodged inside the machine.
I decided to take some soapy water and paper towel and clean off the case. After the cleaning, I took the Compaq inside, to the hallway near my room to dry it off in room temperature heat. 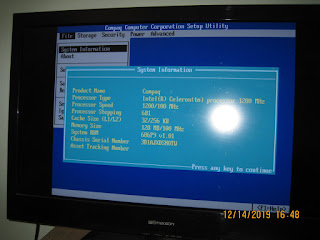 I finally tried to boot the Compaq up for the first time in 10 years. I plug the power supply in and suddenly the computer boots up without me touching the power button. Confused, I bring my dad in to see what the issue is. He thinks that some sort of component is jamming the power supply, so he starts taking out all of the adapters from the PCIE bus. He also took out a stick of RAM that could be corrupted. To my surprise, the computer boots up passed the BIOS launch, but couldn't get to the Windows XP launch because NTLDR was "missing". 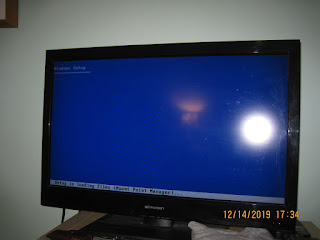 We try several times to reboot to get the computer running again after all its years of sitting decrepit in a barn, but to no avail the computer wouldn't nudge. I then remembered that there were copies of Windows XP online that I could burn to a CD with the product keys. I check the Internet Archive and found an SP3 ISO with a product key. I burn it to a CD and placed it in the Compaq's CD-ROM drive. I restart the machine and boot from CD and load up the somehow working Windows XP launcher.
I hit enter on the launcher and then went ahead and attempt to fix the old installed Windows XP installation that my dad had back in 2007. It reads the drive well, but then issues started happening with copying the directory files over. The installer kept halting at random files, and I couldn't really hit retry because it kept halting. I had no choice but to skip the files. After getting through the copy process, I restarted the Compaq and it still said "NTLDR is missing." I went back into the XP installation and opened up the developer console. I copied over the NTLDR from the installation disc, but it showed that the NTLDR file was already on the Windows XP. The NTLDR was probably corrupted, so I had to do a clean install of Windows XP. After going through the clean install, I was able to get passed the NTLDR issue thankfully, but by the time I was ready to install XP, the directory files were corrupted and I could not get through the complete installation of Windows XP. 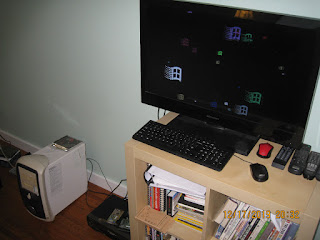 Fortunately, I had another plan. I thought that maybe Windows 98 could run well on it, and I had the option of trying this out since I had an ISO of Windows 98 SE with a product key, so it was worth a shot at trying to a get the OS running. After inserting the CD, I went through the installation without any issues which was a sigh of relief. I finally got to the start screen and was happy to see that completely working OS has been installed on the Compaq. Unfortunately, Windows 98 doesn't have 32 bit+ color graphics, as well as no more than 640x480 screen resolution. For the time being, we're going to have to work with these bad graphics for now.

What I do plan on getting set up is the desk and an old LCD monitor for this project. I'll keep this updated as time goes on.